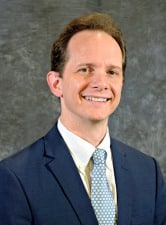 A native of Canada, Dr. St-Hilaire has been practicing medicine since 2001 and has been at LSU Plastic& Reconstructive Surgery for eight years. Dr. St-Hilaire specializes Craniofacial and Microsurgical reconstruction including.  He is board certified in both Oral and Maxillofacial Surgery and Plastic and Reconstructive Surgery – and possesses a great deal of experience and expertise in both of these disciplines.  His practice is focused in solving complex craniofacial problems in pediatric and adults patients as well as performing diverse microsurgical procedure including breast reconstruction.

Dr. St-Hilaire has the distinction of holding both a medical doctorate (MD) and a doctorate in dental surgery (DDS). He earned his DDS at McGill University in Montreal, Canada in 1997. He completed his General Practice Dental internship at Sir Mortimer B Davis-Jewish General Hospital in Montreal, Canada in 1998. Dr. St-Hilaire earned his medical doctorate at Mount Sinai School of Medicine in New York City in 2001. He completed his Surgical internship at Mount Sinai Medical Center in New York City in 2002. Dr. St-Hilaire completed his residency in Oral and Maxillofacial Surgery at Mount Sinai Medical Center in New York City in 2005 – and also completed a residency in Plastic and Reconstructive Surgery at Louisiana State University Health Sciences Center in New Orleans, Louisiana in 2007. In addition, he completed a fellowship in Craniofacial Surgery at Johns Hopkins/University of Maryland in Baltimore, Maryland in 2008.

Dr. St-Hilaire’s accomplishments include a number of academic, professional and research appointments. His teaching experience includes serving as director and co-director of numerous fellowship and CME courses. In addition, Dr. St-Hilaire has been published more than 30 times in prominent medical journals, has presented more than 20 papers and has been invited to speak at dozens of seminars and conferences.

All patient satisfaction ratings and comments are submitted by actual patients and verified by a leading independent patient satisfaction company, NRC Health. Patient identities are withheld to ensure confidentiality and privacy. Only those providers whose satisfaction surveys are administered through the LSU Healthcare Network are displayed.