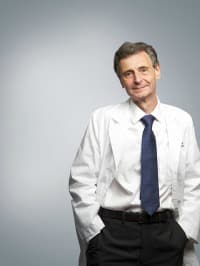 One of My Toughest Cases

In late high school, he was inspired by his paternal grandmother, a midwife; and his father, a physician, to enter the field of medicine. He opted to specialize in neurology, and the motivation behind this was simple and clear: “All of our humanity is contained in our brain,” he says.

As a neurologist, he encounters —and solves — medical mysteries on a daily basis, and like most health care professionals and scientists, must deal with regulatory and financial hurdles.

One case in particular, though, stands out as a stunning example of his own perseverance and the power of trial-and-error — along with his bedside manner that fosters trust among his patients.

Olejniczak gives credit to the patient himself, who suffered from medically intractable focal onset epilepsy — a condition for which there is still no ultimate cure. The patient has been able to make some progress because he has placed his trust in the doctor, who experimented with multiple types of therapies and medications before finding one that worked the best.

“He tried all available medications and encountered dangerous medication side effects on the way,” says Olejniczak. Then, they decided to try a ‘smart brain stimulator’ — an implanted device that delivers electrical stimulation to regions deep in the brain. At the time, it was still in the experimental phase and so far the results have been progressive if not perfect.

“We have been fine-tuning that device all the time to achieve modest improvement,” he says.

Over the course of his career, the doctor and his patients have learned together to never give up. In his capacity as a physician, Olejniczak says that he is proud of the ability to overcome adversities to set up epilepsy care accessible to all patients.